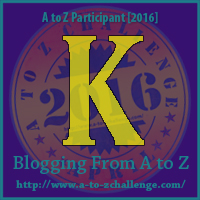 This post is part of the Blogging From A to Z Challenge.

Ok, fine. I confess. I drank the Kool-Aid. Not literally. I haven’t had a sip of Kool-Aid in years. Ever since I started “adulting” years ago (years behind schedule), I make more of an effort to drink real juice. If I don’t see “100% Juice” under Nutrition Facts on the side label, I don’t buy it. The exception being Simply Lemonade—original or with raspberry. That stuff is delicious!

My confession is jumping aboard the kale bandwagon. Years ago, it had its turn of being the fad food of the moment, like blueberries, quinoa, and Greek yogurt. Everywhere I turned and looked it was all about kale. Dr. Oz espoused the greatness and benefits of the superfood. This was when I trusted and blindly followed Dr. Oz like he was my own personal doctor. Until I didn’t. His health tips were actually turning me into a hypochondriac.

Joining Dr. Oz were magazine and online articles with multiple mentions of the leafy green vegetable in the collard green family. Fashion got in on the craze. I saw T-shirts, sweatshirts and tote bags with “kale” in simple type emblazoned across them.

I searched for kale on Fresh Direct and added it to my cart. Not trusting myself to prep it correctly on my first venture, research notwithstanding, I opted to order a prepared side that required only heating up. It was steamed with garlic.

Its dark green appearance reminded me of spinach. When I removed the clear plastic lid, I caught a whiff of garlic, which I like. I can’t remember what I prepared as the main dish, probably chicken breast or turkey wings.

The bitter taste jolted me. It was chewy and I felt like I was chewing forever. I didn’t like it, but finished it anyway. I don’t like to waste food or money, especially mine. I continued to eat it throughout the week. Saturday I fried it with two eggs for breakfast.

I ordered the side a few more times, hoping the taste would grow on me, like V8 and Greek yogurt did. It didn’t. But Dr. Oz said it was good for me, so I added it to my rotation of spinach, green beans, broccoli, corn and mixed vegetables. After a few months, I stopped ordering it. I was eating healthy otherwise. There was no reason to continue torturing myself.

Kale returned to my life when I decided to do the Shred diet. Six weeks of smoothies and clean eating. That’s hard to do without my buddy kale. I didn’t have to deal with the bitter taste and rough texture, which were camouflaged by sweet fruits and vanilla soy and almond milk. I prefer to eat spinach and drink kale.

During the six weeks, I became adventurous with my snacks. I did away with Doritos and Cheez Doodles; along came sunflower seeds, dried apricots and kale chips. I discovered a brand called Brad’s Raw Leafy Kale, which I also sometimes found at TJ Maxx and Marshalls. I knew I didn’t want Naked, which was unflavored, so I got Natural Nacho. I’m not a fan of spicy (read: I’m a whimp), so I stayed away from Nasty Hot.

I used to buy the chicken Caesar salad from Pret for lunch at work or dinner before late night classes in grad school. One day as I was eating the overpriced, but delicious bowl of romaine lettuce, grilled chicken, croutons, Parmesan cheese at my desk at work, I bit into and promptly spit out the unmistakable taste of raw kale. I failed to notice that Pret changed the recipe to include kale. I plucked out the trespassers and saved them for the next morning’s smoothie. Hey, food, especially kale is expensive.

I did that a few more times before I realized I was being ridiculous by picking out and saving for later pieces of food. Mind you, I was doing this at work. I’m down to one salad I like at Pret: chicken avocado. Otherwise, it’s homemade salad or a Wreck salad from Potbelly.

I introduced my aunt to kale. Before that, like me, she was strictly spinach and collard greens. After hearing me talk about it so much, she bought it as well. She adds it to her smoothies that she makes with the 900 Series NutriBullet I bought for her last Christmas.