#BlackLoveBooks Challenge Day7: To Be Read: a book you’ve been waiting to read

As of now, my Goodreads account says I have 404 To Be Read books. I’m sure I have more titles scribbled on random pieces of paper, emails and texts I sent to myself. What We Lose by Zinzi Clemmons received lots of publicity and positive reviews when it was 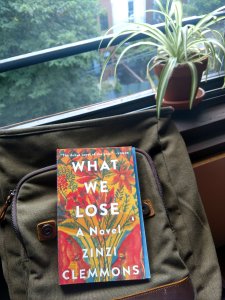 released in June 2017. Considering the aforementioned out-of-control To Be Read list, and my struggle to save money by buying less books—or at least buy paperbacks, I patiently waited for the soft cover release.

Thanks to an Instagram post by Well-Read Black Girl (@wellreadblackgirl), I tuned into a NYPL Schomburg Center for Research of Black Culture Facebook livestream of Clemmons discussing her novel. It appeared to be part of a book tour celebrating the paperback release of Lose. I was late logging on and  missed the beginning, but learned about her appearance later that same evening at Word Bookstore in Brooklyn with Morgan Jerkins. I’d been wanting to visit that bookstore for quite some time, so it was a win-win situation.

That evening, in danger of being late again (which I was), I grabbed my copy of This Will Be My Undoing from my shelves, hoping I’d be able to get Jerkins to sign it. Jerkins and Clemmons not only discussed the main character Thandi’s yearning to find love and some stability in the form of a mother figure, but they also discussed the importance of black women’s voices in all forms of storytelling. I was again reminded that not only do I need to buckle down with my writing, but I still wanted to read What We Lose. (Sometimes I lose interest in a book.) Having lost my mother at a young age, I’m drawn not only to mother-daughter stories, but stories about daughters losing their mothers.

From the back of the book:
Raised in Pennsylvania, Thandi views the world of her mother’s childhood in Johannesburg as both impossibly distant and ever present. She is an outsider wherever she goes, caught between being black and white, American and not. She tries to connect these dislocated pieces of her life, and as her mother succumbs to cancer, Thandi searches for an anchor—someone, or something, to love.

While people who already owned copies waited in line to get their books autographed, I sprinted back to the upper level to purchase a copy. In one event, I managed to get two books on my TBR signed, but I forgot to ask for a picture with either author. Oh well. It was still a great evening, and I have my books. 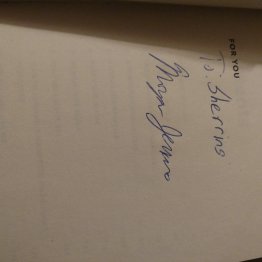