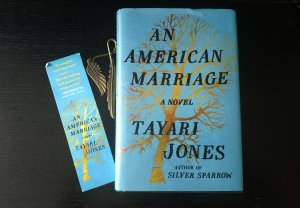 My rinky dink camera phone doesn’t do it justice, but the jacket cover of Tayari Jones‘ An American Marriage is absolutely stunning and gorgeous. Designed by Jaya Miceli, it has a simple graphic of a many-branched tree with  the rich topaz background color that makes the whole thing pop. The matching marketing bookmark that I got months before the book’s release was so beautiful added it to my collection of bookmarks instead of throwing it out like other marketing bookmarks.

The saying you can’t judge a book by its cover certainly applies to An American Marriage. It’s a simple, but beautiful cover. The same can’t be said for Celestial and Roy’s marriage, nor of Celestial and Andre’s relationship–although it is beautiful that they are childhood best friends.

What does a tree have to do with the title? The story? Is it in reference to a family tree? Is this one of those epic sagas that spans decades and generations?

It is not. It is not a beautiful love story in the typical or traditional sense. Girl meets boy. Girl falls in love. Girl gets married. Girl lives happily ever after. Nope.

Celestial, a dollmaker, and Roy, an executive, are newlyweds when Roy is falsely accused, arrested, and convicted of a crime he didn’t commit. Celestial knows he didn’t do it. She and her parents support and stand by Roy. The couple believes their nascent marriage can survive the twelve year sentence, or at least try to.

Before Roy’s conviction is overturned after serving five years, Celestial’s visits and letters have all but dissipated. While time stood still for Roy on the inside, on the outside Celestial’s life–a flourishing dollmking career and friendship with Andre–marched on.

For decades, Andre and Celestial have been platonic best friends. He was the connection between Celestial and Roy back in college and was a part of their wedding. He’s always been respectful of their relationship and kept his distance.

You big dummy! I was constantly frustrated with Andre. We can debate the morals of him becoming involved with another man’s wife at another time–love is complicated sometimes. He should’ve made Celestial his wife to begin with! Back in college, he needed one person, just one person, to tell him “shoot your shot” as they say nowadays. But he didn’t. Instead he played the background. It might sound like I’m Team Andre, but I can’t definitively say that I am.

Roy was a player until he met Celestial. While I feel compassion for a man doing time for a crime he didn’t commit, I can’t say I wanted Celestial to be with him after he was released. Five years is a long time. A lot happens in that time. Feelings change. People change, especially a man who’s been imprisoned and learned life-changing news during that time. It’s a plot twist I could’ve done without, but I accept nonetheless.

I like that a novel set in Atlanta, about a black couple and extended family dealing with the repercussions of the forever hot button issue of innocent black men serving prison sentence is titled An American Marriage. It turns the whole  phrase on its head. Why should the phrase only conjure up white suburban or mid-western families?

A few weeks ago, I sat elbow to elbow with a man on the Nostrand Ave subway platform in Bed-Stuy Brooklyn. I recognized the beautiful and unmistakable jacket of An American Marriage in the hands of the 40-something-year-old white man. It took all my self-control not to rip out my earbuds and interrogate him. I wanted to know how he’d heard of the novel, did he like it, why was he reading it, how did he feel about it. I noticed it was not a library copy and it did not have the Oprah Book Selection emblem on it. Mine didn’t either because I had pre-ordered it from Amazon months before its release.

He hadn’t gotten far enough for me to ask him if he was Team Roy or Team Andre. Boy was he in for a treat. My reception to stranger’s commentary on a book I’m reading varies by my mood. I didn’t want to be The Annoying Stranger. In the end, I didn’t say anything to him, even though I wanted to discuss the book, suggest her read Tayari’s other novels, and share my excitement that I’d met her at a book club meeting, book signing and book conference.