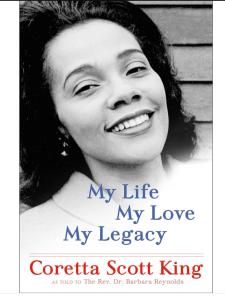 History often relegates Coretta Scott King to the background story of Dr. Martin Luther King, Jr. Yes, she was his widow and mother of his four children, but she was also an activist and feminist in her own right. She founded the King Center for Nonviolent Social Change, lobbied for Dr. King’s birthday to be declared a national holiday, and helped Nelson Mandela get elected president after being released from prison.

From Amazon: Coretta’s is a love story, a family saga, and the memoir of an extraordinary black woman in twentieth-century America, a brave leader who, in the face of terrorism and violent hatred, stood committed, proud, forgiving, nonviolent, and hopeful every day of her life. 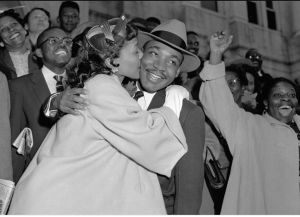 Released in 2017, eleven years after Scott King’s death, My Life, My Love, My Legacy is Scott King’s memoir in her own words as told to Rev. Dr. Barbara Reynolds. After growing up reading and watching so many documentaries on Dr. King, we finally hear about the woman who stood shoulder to shoulder with him–a feat that could only have been made possible by love.