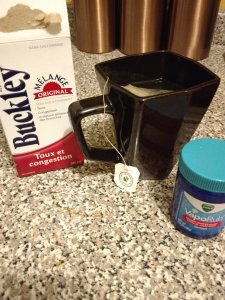 I have the weirdest luck. Words have power so I don’t want to release into the Universe that if it weren’t for bad luck, I’d have no luck at all, but it’s hard not to feel that way lately, especially after the recent, horrible traveling experience I had when I flew to the west coast.

I lost a whole vacation day because due to a weather delay, stupid Alaska Airlines wouldn’t let me board my connecting flight in Portland, Oregon, to Santa Barbara, California. Instead they re-routed me to Phoenix, Arizona, then to Santa Barbara. Of course I didn’t get my carry-on, that they made me check at JFK, until the next morning even though it had arrived before I did.  The small airport was deserted at just 11 pm. Compensation: a pouch with one or two time use mini-toothpaste and other toiletries. I have yet to write my strongly worded letter to Alaska Airlines. I better get some free miles or discount tickets from the ordeal.

I’m almost always cold. Even though I know I’m going to be sweating buckets during the 3-4 song walk to the subway station near my apartment, I grab a jacket, sweater or Pashmina scarf because the air conditioner on the subway and my final destination will have my teeth chattering. I get teased about always being cold, but I don’t care.

Year round, my hands can feel like ice bricks, not only because of the aforementioned blasting AC, but also because of poor circulation (I guess?). I’ve never been officially diagnosed, but it’s a thing I hear people say. I have been officially diagnosed with anemia, which would explain the always being cold thing. I add spinach (or kale) to my morning smoothies and take an iron supplement and a multivitamin with iron to no avail. Oh well. I’ve learned to live with it.

Apparently, I’m also going to have to learn to live with bouts of Bronchitis. It struck me for the third time. The first two times were about a year apart and both in February. This time? July. Freaking July.

When the cough first developed in my chest, I figured I was getting sick because of airplane air. Not to mention that that week the air conditioning on the bus, subway, office, movie theater and writing workshop all seemed to be set on Arctic freeze. With a scratchy throat, I thought I was catching a cold. Then came the cough, which got worse. Deeper. Hallower.

This cough was familiar. I knew what it was.

Who gets bronchitis in the summertime? Me. #ImSpecial

Before it could get any worse, I hustled my behind to Urgent Care not too far from my apartment. I was already in the system As I told the handsome doctor my symptoms, he asked me if I had been taking anything. “Just drinking gallons of tea and Buckley’s so I can sleep at night.”

He laughed and asked where I was from. I told him my family is from Haiti.

“That’s what I thought. Only island folk and Canadians know about Buckley’s.”

He listened to my lungs. “Yup, you definitely have bronchitis.”

I had to laugh. Of course I’d be the weirdo who gets bronchitis in the summertime.

I posted on Instagram: Who gets bronchitis in the summertime? Me. #ImSpecial.