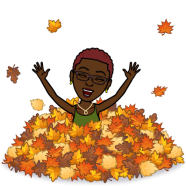 It was love at first sight. I took a screen shot and added it to the Hair album. Months before I had cut off my butt-length locs of fifteen years back in April for my birthday, I was obsessed with finding and saving short hairstyles I wanted to try. People think I’m kidding when I say the main reason I wanted to chop off my hair was to rock funky parts, lines and designs shaved into my head, and to experiment with color.

When I had locs, I had dozens of lines and parts in my head. The longer my hair got, the funkier and more elaborate the styles became. Strangers complicated me. My favorites were the ones that looked like intricate weavings. The older hair (tips and upwards) naturally changed to a dark brown with a red tint due to age and sun exposure. I was unaware until my goddaughter commented about it, thinking I had it done at the salon. I asked her to take a picture because the mirror never revealed it to me.

I had only bleached or colored my hair twice. Once was after surviving a near-fatal car crash. I had my stylist dye my hair a copper orange color. The color shocked family and co-workers. I loved it. Another time I asked my stylist to bleach a few random locs. Streaks were in vogue at the time and that was the locs version. The twisted bleached and non-bleached locs looked gorgeous together.

Not since then have I manipulated the color of my hair. Gray hairs have cropped up in

singles and clusters throughout my dome. I never felt the need to color to hide them. The first few sprouted in my early twenties so I don’t view gray hair as a sign of aging. Even so, so what? I am getting older and no matter how much my back and knees ache, I don’t want to go back to my twenties. I laugh at my 90-something year old grandmother and 50+ years old aunts who insist on dying their hair. Really people?

This short(er) hair journey has been interesting. For starters, it’s actually more work. Salon/barber visits need to be more frequent. The whole chopping off over a foot of hair was radical. I wanted multiple lines shaved into my head, but the barber told me to stick to one for the time being. The next time I had a zig zag on the right. Its tail dipped down toward the nape of my neck to form a v where it joined with the line starting near my left temple. Other times I had a simple line. Most recently, I had a 3D zig zag. Had the barber executed it properly it would’ve been spectacular, but he nearly balded the right side. It took weeks to grow back and for my self-confidence to return. My boyfriend did not compliment me at our anniversary dinner.

In honor of my favorite season, fall, and with upcoming events I decided it was time to take the plunge. As much as I loved the reddish-brown color, it took bravery. I didn’t know if I was bad ass enough to pull it off. Counterargument: yes, I was. In addition to the standard lobe piercings, I have an industrial  bar in my right ear and an anti-tragus in the left. I have a lower back tattoo aka tramp stamp and one between my shoulder blades. I’m not as conservative as I think. My polka dot glasses alone are proof of that. Never mind all that though. The color perfectly matches my skin tone. It would look awesome. If it didn’t, I could always dye it black.

The stylist/barber gushed. She loved it for me. She should. The color was similar to her own amber afro. Butterflies fluttered in my belly. The pungent smell of the chemicals and the itchy, tingling of my scalp had me worried that my hair would fall out. I recently had a phone interview and felt confident I would be called for an in-office interview. Would they deem the look unprofessional and not want to hire me? Oh well, if they did. Then that wasn’t the place for me.

The color had to sit for 30 minutes to take. I played on my phone, took pics and read a little. Though the tingling had subsided, it returned during the washing process. Oh Lord, was it going to come out in clumps? I’d read many stories about women whose hair fell out after visits to the salon. I reminded myself that most of those were perms gone wrong. My hair was a crown whether in locs or short ‘fro. There’s no crown if I’m bald! 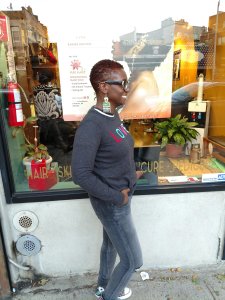 My barber removed the cape. I lifted the handheld mirror. I couldn’t stop smiling at the reveal. The color came out better than expected. Beforehand, she explained she’d add other colors so it wouldn’t appear washed out. My hair had bright, light and dark tones, giving it some depth. It looked reddish-brownish-goldish. Good luck finding the Crayola crayon to match it. “I know this isn’t food, but you put your foot in this color, girl!”

Before I left the salon, I recruited another stylist to execute a small photoshoot outside in the chilly fall air. As a long time patron, she and I often bantered during my visits. My demeanor changes after my appointments. I’m more confident. She teased me that she couldn’t stand me because I’m so pretty and conceited. “You know you can’t tell me nothin’ after I get my hair done.” I added, “flips hair that used to be there over my shoulder” and did the motion as I said it. Other patrons and stylists laughed. I looked good. It felt good to know I looked good.