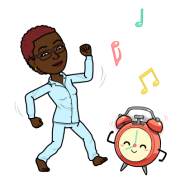 As sexy as a man in uniform is to me, I used to swipe left on eHarmony, Match, Black People Meet, Plenty of Fish, or whatever dating app I was using at the time. I didn’t want to deal with the stress of dating a man whose profession was a police officer or firefighter. I imagined receiving the dreaded late-night phone call or knock on the door delivering bad news.  When it came to the armed forces, I worried about PTSD. Knowing I had my own emotional baggage I still had to reconcile, I did not have the capacity to help someone else deal with his. At least not in a romantic relationship where the stakes are different than in a regular friendship. Call it naïveté or ignorance, but that was my way of thinking.

We were still in the early stages of dating when I found out he was in the Reserves. Army Reserves. There had been no mention in his profile or pictures. He believed it was corny for men to use their service as a way to hook women. Points for him, I guess. The revelation threw me for a loop because he was still active. Once a month, every month, he had to go away for a weekend to fulfill his duties. Once a year, he had to go away for two weeks. I knew the rules because I’ve heard the recruiting commercials on the radio. They tried to entice people to join because of the “little” time commitment but huge perks and sense of duty. The only thing it conjured up for me was the fear of being sent to war. No secret that brown and black folks are the first sent over. #History

Of course, because I and by extension anything somewhat connected to me is special, his circumstances were different. When it was time for him to report for weekend duties his commander wanted him to report on Thursday not Friday. A whole extra day of quality time lost. No biggie. I learned to adjust. Depending on if he were flying or driving, we’d chat or text while he sat at his gate or navigated out of state.

His weekend duties were non-negotiable, so we’d sit on my couch and sync our calendars—old school actual paper calendars not our phones. With dates marked, we could plan. Knowing he’d be away, there was no point in asking if he wanted to attend a concert or go to the movies. I could dip to Boston or make plans with girlfriends. Those weekends would be Just Sherring.

We started dating in September. In late December when a cousin and his wife were in town staying with me, we had a couples outing to see an exhibit curated for Mickey Mouse’s 90th birthday. I was nervous and excited. His first meeting of family. Not to mention, this was the first family-paramour meeting in over fifteen years. #SingleLife

Over burgers and shakes, they asked about his military service. I knew that he’d been deployed overseas before. Twice to be exact. I knew that he had been back from his second for only a little over a year. What I didn’t know was that his call-back window of exemption had expired. Fuck. I didn’t know there was a window. I didn’t know to ask. He didn’t think to share. I picked at the rest of my food.

Months later, we were sitting on the steps of the Brooklyn Library, having another Come to Jesus conversation about our relationship status. He delivered a punch to the gut. He had received notice. I grew chilly in the summer air. I felt silly. Here we were arguing about ignored texts and unreturned phone calls, and the man had been dealing with the news that he was getting deployed again. I was the first to know. Twisted that I am, I felt flattered. How shitty am I? My initial reactions are feeling silly and flattered. Then I felt remorse that I’d been adding to his stress when he was dealing with major issues. Fear, sadness and longing followed. He was going to be in harm’s way. He was leaving me. He was leaving.

His past relationships didn’t survive deployment. With me flipping out over the silence of non-communication of a week, he didn’t think I could handle inevitable stretches of silence during a deployment. That’s how he’d tip-toed into the delivery. “If you can’t handle me not calling you when I’m here , how are you going to handle it when I’m away?” Weird, but I let it go and we argued about other stuff. At one point he was silent and couldn’t make eye contact. My heart thudded in my chest as I thought I was about get dumped. I don’t know if the deployment news was better or worse.

I admit he was right to a certain degree. I would be anxious not hearing from him. I would take it as being ignored or rejection. But, I told him that if he wanted to end things because of his deployment, don’t pin the reason on me. Say he doesn’t want the stress of being in a long-distance relationship, not she can’t handle it. He can’t make that declaration.

Sidebar: I’ve been in a long-distance relationship. I lived in Boston, my ex in Florida. We made it work for over a year. He literally called me every day, even during my trips to the west coast. Weekdays, weekends, holidays. Never missed a day. I rarely initiated phone calls. We flew back and forth visiting each other. During my Thanksgiving break visit, he abandoned me. He stepped out in the morning saying he had to get something. Day turned to night. I wandered the city alone. Ate alone. I was in bed when he returned past 10 pm. He’d lost track of time, he said. We lost track of each other when I returned home.

So yeah, I’m experienced in a long-distance relationship. It’s not ideal and I’d rather not do it again, which is another reason why when looking at dating profiles, I’d swipe left on men who seemed too far away. Unless the profile was over the top impressive or the man was drop dead gorgeous (read: abs), I  swiped left on men in Jersey or even in the Bronx, definitely Connecticut and Philly. I don’t even know how they cleared my filter. I don’t have a car anymore, so no two-hour train rides for me. I made an exception for a Harlemite, but like the others, that blew up in my face. Not because he lived in Harlem, but because he was trash.

In this case, it was too late to swipe left. I’d already swiped right. We emailed, talked on the phone, went to dinners, watched movies, texted, met each other’s people, had sex, agreed to be exclusive and other couple-y stuff. We were in a bonafide relationship. I didn’t want to call it quits because he was leaving temporarily. We weren’t married, but what the fuck is the point of a relationship if we don’t stick it out for better or worse? Challenges like this are what determine if a marriage is even feasible. I made it clear in my profile I was looking to become girlfriend, fiancé then wife. Not looking for a just a friend, casual dating, hook-ups or other lame options. I want a life partner (eventual husband) who is my homie/lover/friend and I the same to him. You’re being deployed? I got you, babe.

With the deployment months away, I followed his lead and didn’t talk about it, though it was always on my mind. Limited time, we have limited time! It was like the red light screeching alarm in movies that goes off  warning of danger. I wanted to be intentional with our time, even more so than usual. He was as nonchalant as ever. I was hyper-aware that we’d miss out on at least a year’s worth of activities and holidays, so everything had to be big and special. Memorable. Take lots of photos!

I mourned the fact that we wouldn’t be able to spend the holiday season together. Last year we were brand spanking new. We didn’t spend Thanksgiving and Christmas together, but we did ring in the new year together. He was my first Valentine in years, my first significant other by my side for a milestone birthday, first boo I’d ever taken a trip with. We took a few! Trips, birthdays and holidays together had to be put on hold for a year. Back to the seemingly single life.

“What are we, in junior high?” He thought the terms boyfriend and girlfriend were juvenile. To me they meant the world. They meant I was (finally) claimed. It was during yet another deep relationship status discussion (argument) that he agreed to give me the title. “You want the title? Fine! Have at it!” Even then he hadn’t said the word girlfriend. He never introduced me as such to people, telling me that they already knew who and what I was to him because he doesn’t bring women around anyway. Never mind that a majority of his friends are women. Part of our similar life stories is that we’ve been single for years because we’re always friend-zoned.

Yesterday, I escorted him to the airport for a minimum nine-month-long deployment. That’s just a smidgen less than we’ve been coupled. In the grand scheme of things, it’s not long. Other couples and families have dealt and continue to deal with longer deployments. It’s the length of a pregnancy. My family just welcomed a baby in September, another joins us in December. Next week, I hop a plan to Florida for a friend’s baby shower for a baby also due in December. Time seems to have flown by since those pregnancy announcements. I can do this. I will be fine. I will use the time to work on me.

As we killed time at the food court before he walked to his gate, we joked about our titles. He said he had heard someone refer to his significant other as “partner.” He wasn’t gay. He preferred it over girlfriend and boyfriend. “So you want to call me your partner?” i asked. The term did sound more mature, but I wasn’t tickled by it. It connotes same-sex, dance, business, or empty, affectionless sexual partner.

He plans to retire in less than two years, at the twenty-year mark. We’ve got ways to go before being ready for marriage—another source of tension between us. He once commented we’d have to get married in Trinidad for his family’s sake. He’s flip-flopped saying he doesn’t believe in marriage. Come again? Please refer back to what I said about the evolution of my titles. It concludes with wife. As I was saying: when the time comes for us to be married, he’ll probably be retired. I won’t be a military wife.

I never thought I’d be associated with the military. That was the point of swiping left on pictures of men in uniform. Now here I am, a military girlfriend. Excuse me, military partner.