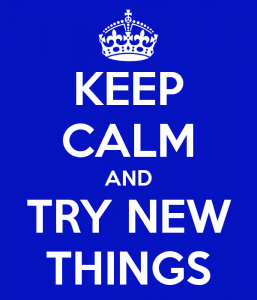 I’m far from a social butterfly. I’m the worst when it comes to making idle chit chat. I choke and stutter. I don’t party. I barely drink. While I love to dance and jump around in the privacy of my apartment, in a social setting my limbs don’t follow the signals sent from my brain.

A few weeks ago, a cousin invited me to tag along to visit a friend and her new baby boy. I knew this friend and never pass up the opportunity to see, and possibly hold, a cute new baby so I agreed. As soon as we finalized our plans, I hung up the phone and called another cousin.

She immediately asked what was wrong. The shakiness in my voice didn’t give me a chance to pretend all was well. In rapid fire language, I told her about the invitation and explained how I didn’t know what to wear, was worried about being a third wheel during the visit because I wouldn’t be able to contribute to a conversation between two mothers and contemplated calling back to cancel. I managed to get all this out while trying to swallow the lump in my throat and willing tears not to take the suicide jump from my lashes down my cheeks. What should’ve been a simple and fun outing seemed like a daunting task for me.

“But this is what you’ve been wanting,” my cousin said to me. She was right. For years I’ve lamented not having many “real” friends and more often than not doing things alone. I want to be around people and do things with them, but when it happens I don’t know how to act.

The visit ended up being cancelled because the New York marathon closed the Verrazano Bridge to street traffic. There are alternate routes to Jersey, but my cousin who was driving, didn’t want the hassle of going around the world for what should’ve been a short and easy trip. My relief outweighed my disappointment.

This past weekend, the same cousin invited me to a 30th birthday bash for one of her closest friends. I marked my calendar and went shopping for the all-black attire affair. I selected faux leather leggings with matching blazer that had fur leather trim on the lapels and bottom half. Silver and black dangly earrings completed the look. I also bought a new handbag, but not for that outing. Thanks to a sale, credit card reward points and coupons, I managed to get about $300 worth of merchandise for a little over $100. I did it all during my one hour lunch break from work on a rainy Thursday.

Saturday morning I woke up feeling excited. I tried on my newly purchased outfit and hated it. I scrambled to put together an outfit from clothes I already owned. The only newly purchased piece I wore was the blazer, matched with a python print leggings and a new top I had purchased the day before just because. I tried to take pictures to of each outfit to scrutinize my look, but neither photographed well on my camera phone. I laid out the second outfit with underwear and accessories on my bed like I used to do the night before the first day of school when I was a child.

Later that afternoon, I walked to my favorite nail salon to get my eyebrows waxed and eyelash extensions applied. Before leaving I gave myself the home edition of a manicure and pedicure. I would need cash for the car service I would be taking to and from the party. I also needed emergency money, or food money if me and the “girls” decided to get a bite to eat after the party.

I had to call the car service three times for a pick up. The dispatcher claimed he sent a car each time, but I called his bluff when I told him I had been standing at the door the whole time. My feet were pulsing from standing in open-toed, 4 inch stilettos in the 50-degree foyer for over an hour. I sent a text to my cousin telling her my situation. I passed the time playing my latest obsession, Candy Crush. The only time I got frustrated that the car had not yet arrived was when I had to wait a certain amount of time for lives to renew to resume playing. Just as I was about to turn and climb the stairs to my apartment, I saw a tan sedan ease into view and stop in front of my building. I hesitated because there had been a few false alarms. What I thought was my car turned out to be cars stopping for the the traffic light.

I gave the driver the address and continued to play Candy Crush while en route. We arrived in less than 20 minutes. My stomach did flip flops. I reapplied lip gloss, paid the driver and headed in. People outside checked me out as I made my way inside. I stopped at coat check before continuing deeper into the belly of the party. I found my cousin by the bar. She was in a lovely mood and tried to get me to dance with her right then and there. It was nearly 1 am. She told me I looked great, as did she, and ordered me a drink, which I knew I would nurse much longer than the average person.

Because she was playing hostess, my cousin couldn’t stay by me and babysit. She made her rounds greeting other guests. The moment she stepped away, my stomach dipped. Even louder than the pulsing music, I could hear my heartbeat in my ears. I gripped the bar. I tried to do a little head bob to the reggae mix being played by the DJ. I don’t like reggae. I willed my feet to move so I didn’t look too stiff. They didn’t budge.

The girl beside me, wearing a top-knot hairstyle, crop top and drawn in eyebrows kept bumping me with her oversize bag. I shook my head in disgust. Every woman knows to wear a clutch for night events. She was oblivious to bumping into me and I didn’t want to spill my drink–my something to do with my hands–so I stepped back nearly bumping into a man behind me.

Several songs later, I barely moved from the bar. Top-knot appeared and disappeared several times, unsteady on her feet. While watching what looked like an orgy on the dancefloor, I felt someone come behind me. I’m not one to participate in butt-to-crotch mating dance with a stranger. I stepped forward. Just as I did so, a man I’m pretty sure was a stranger to Top-knot, jumped behind and grabbed her. Happy for the attention, she bent over in a 90 degree angle and flailed her arms as her rear-end pressed into her partner. Several people–men–gathered a to watch the spectacle. I saw lights from camera phones. In danger of getting my glasses slapped off my face, I stepped back, but the dancers seemed to be following me. Finally I just cleared the area all together, prompting another partygoer to laugh and ask where I was going. I laughed too and said it was all too much for me. I hung out by the food for a short while then reclaimed my spot by the bar, still nursing my drink.

I hoped that because I hadn’t eaten much during the day and because I have a low tolerance for alcohol, that my one drink would kick in and settle my nerves. I wracked my brain to come up with a second drink to request once I finished the one I had. Because of my nerves and lack of drink knowledge, nothing came to mind, not even my usual stand by of rum and coke. I hate to be that girl who needs a drink to relax or have a good time, but in party settings, I am. I had no idea what the drink was that my cousin had handed me. It was pink, sweet and had a piece of fruit floating in it.

When all the ice melted and I could see the bottom of my clear plastic cup, it was time to leave. I checked my phone. Only twenty minutes had passed. I went outside to call a cousin to get a pep talk. She lives on the west coast so I thought she might be up. She didn’t pick up. I contemplated calling and waking, an aunt with whom I have a girlfriend relationship, but I didn’t think it was fair to her. I took it as a sign that my California cousin didn’t pick up to talk me into staying at the party. The next call I made was to the car service that had dropped me off. The dispatcher recognized my voice and remembered my location.

The driver and I laughed when he pulled up to the curb and we locked eyes. He asked me why I was leaving the party so soon. I told him it wasn’t my scene. I reminded him of my street. He recalled the house number and dropped me off exactly at my door. He seemed to look at me with sympathetic eyes when I handed him the second $20 bill of the night and told him to keep the change. I smiled and told him to have good night and bounced up the steps to my apartment.

Back in my safe place, I changed into my pajamas, poured a bowl of Honey Nut Cheerios and settled onto the couch, knowing I wouldn’t last an hour. My California cousin called and I told her what happened. She laughed but said she understood. She knows me. From the moment I applied the first layer of silver eyeshadow from a compact that still looked untouched three years later, I knew I would be a fish out of water at the party, but still looked forward to going. For the first time in a long time, I was getting dressed up to go out for a night on the town. While some might consider the night a disappointment, I was happy to have tried something out of my comfort zone.