February 18th was Toni Morrison’s birthday. My social media feed had an endless parade of birthday shout outs to the revered writer of dozens of novels and winner of the Nobel Prize and other awards. Some pages posted the same pictures, while others posted unique pictures, some that I’ve never seen before.

A surprise to me, and my new second favorite of Ms. Morrison is a black and white photograph of her dancing in happy abandonment at what appears to be a party.  She sports an afro, spaghetti-strapped dress and is adorned by hoop earrings and bracelet on her right arm, which is raised in the air. She’s looking up, with her mouth open and just the top row of her teeth showing.  She looks so happy, whereas I’m used to her looking very serious and dressed conservatively. I’m used to her looking like the serious auntie.  In this picture, she looks like the fun cousin.

My all-time favorite photograph of Morrison is a side profile portrait. In this one she wears more salt than pepper locs, that are loosely pulled back. She has smaller, thicker hoop earrings in her ears. She’s staring up at something not in the frame.  It’s a simple picture, but it exudes so much style, strength and grace. I’ve noticed that she often has a similar side profile pose. 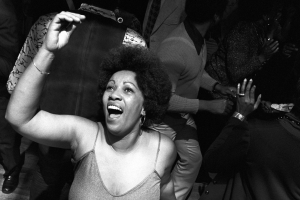 Gray hairs for me first started cropping up during my early twenties. Their appearance has never made me feel old. If anything, I’ve been impatiently to go fully gray so I can take my own photo, similar to Ms. Morrison’s, as an homage, but really just because I think it’s a cool picture. I hope I can pull it off.

Of course I admire more than just her hair. I discovered her work on my own. It wasn’t until I was a junior or senior in college (my late twenties) that one of her novels, Song of Solomon, was assigned reading on the syllabus. With all the mysticism, symbolism and nods to the bible, I struggled to follow what was happening.  I struggled much more than I did when I read Beloved years earlier.

I don’t know how far into the novel, or what in particular made it click for me that Beloved was the ghost of Sethe’s baby. Sethe is an escaped slave, who can’t find peace not because she fears being caught all these years later, but because her home is haunted by Beloved, the baby she killed rather than letting her grow up to be a slave herself. It was a mother’s mercy killing.

Speaking of mercy, one of my favorite Morrison novels is God Help the Child. I saw it on display at the Grand Central branch of the New York Public Library. I hadn’t heard of them book, so it was nowhere on my radar to read. I hadn’t entered the library for it, yet I walked out with that display copy.  I was worried I wouldn’t understand the plot, but I proved myself wrong. Read my summary of that novel here.

April 11, 2013, I had the honor of meeting The Toni Morrison. Bob Herbert served as the moderator for a discussion with Morrison at the New York Historical Society. It was part of her book tour for Home, her latest novel about a veteran returning home from the Korean War. Though he risked his life for his native country, he’s greeted with the status quo of racism when he returns to America.

The discussion was followed by an audience Q&A in the auditorium, and then a book signing. No picture taking was allowed during the book signing. I’m not sure if it was allowed during the discussion, but I managed to get a grainy photo from over 30 feet away. I couldn’t resist. While the photo is buried deep in my Facebook timeline, my autographed copy of the paperback sits on display on the shelf reserved for autographed books. It’s in good company with books by Terry McMillan, Tayari Jones, Bernice McFadden, and over twenty others.

Not gonna lie: I fan-girled when I met Morrison. I told her I was happy to be meeting her because her June appearance at NYPL was already sold out. She replied that she didn’t know her own schedule and looked over at who I think may have been her publicist. There was no personalizing as is the case at other book signings. She scribbled her name and I was shuffled along to make room for the next person in line. I was giddy.  Of course, I posted both the grainy stage photo and picture proof of the signed title page. 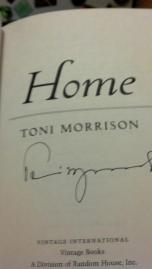 The Bluet Eye is the book that started my fandom.  I was an associate at Borders, walking the sales floor, when I spotted the purple cover with a little girl hunched over looking over her shoulder in front of a house. Her facial expression isn’t clear, but she seemed sad. Everything about her posture screamed sadness. And that’s all it took. I wanted to read the story about the little black girl, Pecola, who wished for blond hair and blue eyes. Unfortunately, wanting to be a white girl is a rite of passage for lots of (older) black women, myself included. These younger generations of girls (and boys) are fortunate to have a slew of black positive, self-esteem books, movies, programs to plant the seed of pride in their chocolate brown skin and kinky, nappy hair. I’m here for #BlackGirlsRock and #BlackBoyJoy.  In my case, I didn’t want to be white, per se, but I wanted to have long silky hair that moved when I moved.

I usually boast that I read The Bluest Eye before it was an Oprah Book Selection.  In truth, there might have been chatter about it becoming an Oprah Book Selection, which is why it was on a bookend in the first place. No matter. Starting with Morrison’s debut 1970 novel was a great introduction to her work. I felt understood and seen. 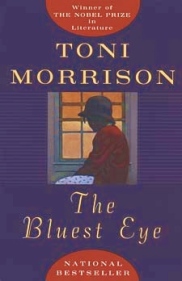 Since then, I’ve tried and failed to follow the narratives of Sula, Paradise, and Tar Baby.  Perhaps I was too young and dumb to understand them. Now that I’m a more mature person and reader, and have more life experience I might be more successful if I attempt re-reads. I might even make it to the end.

I’m thankful for Toni Morrison’s work and for her advocacy of African Americans through her work. She normalizes our lives and experiences. We are our own heroes and saviors without the aid or interference of white folks. She’s affected many readers’ lives and inspired countless writers. My feed is proof of that.

As if we needed another reason to LOVE Black women…here’s one and her name is #TONIMORRISON! ✊🏽